The History of Chocolate

The source of chocolate is found in the beans of the cacao tree. This tree was named Theobroma Cacao (Theobroma is Latin for drink or food of the gods) by the Swedish botanist, physician and zoologist, Carl Linnaeus, latinized as Carolus Linnaeus, also known as Carl von Linné.

Ecologically, this tree originated in the Amazon basin, probably in the upper reaches of this river basin which is located mainly in Brazil, but also in Peru and several other countries.

The word “cacao” or “Kakawa” is considered to be of Olmec origin. The Olmec people occupied an area of tropical forests south of Veracruz and the Gulf of Mexico from 1150 to 300 B.C. The Maya apparently adopted this word as either Kakawa or kakaw, depending on the period of time in which they lived. The Aztec, who lived 1376 -1520 A.D. believed that the creation of the cacao tree came from their god Quetzalcoatl (pronounced ket -sal -koh -AH- tul) who descended from heaven on a beam of a morning star and carried a cocoa tree taken from paradise. Quetzalcóatl taught the people to take the pods, roast the beans and to grind them into a fine powder. 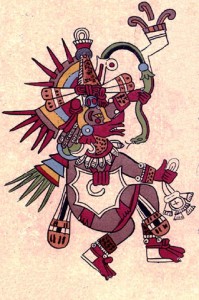 In both the Mayan and Aztec cultures this ground powder was the base for a thick, cold, unsweetened drink called Xocoatl (chocolate) believed to be a health elixir. Taken as a “gift of the gods”, it was believed that the drink cured diseases, promoted fertility and was a sign for life. Since sugar was unknown to the Aztecs, different spices were used to add flavor. The Aztec emperor, Montezuma, drank thick chocolate dyed red usually with annatto. This may have represented blood.

Cocoa beans were used for currency; one hundred beans bought a slave and ten purchased a rabbit. It is said that Christopher Columbus and his son, Ferdinand, were surprised and confused by how much value the Native Americans placed on the cacao beans, saying:

“They seemed to hold these almonds [referring to the cacao beans] at a great price; for when they were brought on board ship together with their goods, I observed that when any of these almonds fell, they all stooped to pick it up, as if an eye had fallen.”